Good morning.  Our challenge theme for this next  two weeks has been chosen by Sue.  As I am sure everyone has some bling and glitter it should just be a matter of choosing which CD to use.
I decided to go with both.  I have some beautiful glitter threads by Gutermann in my work box and a good selection of dazzlers so it was just a question of how to use them.  I hadn't done a stitch card for a while and as I  had just received an email from Stitching Cards  I went shopping.

I bought this new  pattern which is in their best seller list.   I thought it would be perfect for showing off the glitter thread: 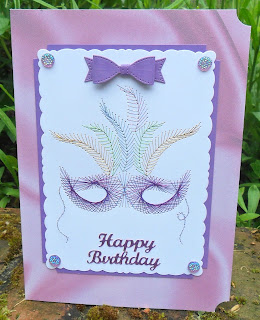 The background card was printed using Joanna Sheen's CD - Fashion Boutique CD 1.  The pink silk 'material' compliments the stitching.  The toning dazzlers were placed in the corners and of course my favourite 'Itty Bitty Bow' as the finishing touch.
The threads are a joy to use and I really enjoyed the stitching on this card.

for our second Judith Maslen Workshop for 2015.
It was off to the seaside on Saturday for the workshop.  There are three of us who travel together - an early start and my turn to drive again.  A round trip of about 140 miles but worth every mile.

Our first 'water' project was a white work pattern called 'Water Iris'. It was quite quiet in the workroom whilst we were concentrating on the embossing. It really is a skill that takes so long to learn and if our endeavours look anything like Judith's sample we are all pleased.
The really pretty detail on the image are the dragonflies and the little star tool  impressions.  I stitched tiny tiny crystal beads through the star impressions to add the look of bubbles and to attach the image to the card.
Here is my offering 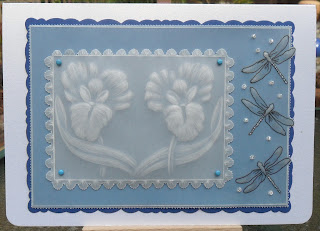 Our afternoon project was quite different and I think my favourite.  Judith has designed a series of patterns around Musicals and this one was inspired by 'Singing in the Rain'. 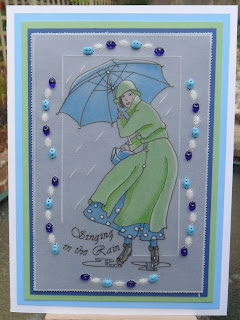 I loved doing this one.  I used Faber Castell pencils and Zest It for the coloring.  This is done on the back of the image and then dry pencils used on the front to add shadow.
The almond shape decorations around the edge were originally one filled in with embossing and one cut out -  alternating.  I chose to use beads in the cut out shapes to add beads that I had of the same shape in order to attach to the background card.
Another fantastic day Judith thank you.  Already looking forward to July.
Carol
xx

It is quite a while since I have received a commission but I received this one from my daughter in law and was given just a week to complete my mission - if I wished to accept.
The remit I was given  was a wedding card for a couple who are mad about their camper van.  It is called 'Audrey' (I didn't ask!) and they spend a great deal of time and care with/of  Audrey.  I explained that if I was to follow this theme I couldn't produce a traditional white/cream all bells and whistles Wedding type card  - but I was told that that didn't matter.
Whilst we were chatting on the phone an image came to mind of a card I had already made.
You have seen it before - here it is. I had made it for a CD Sunday theme - On the beach. 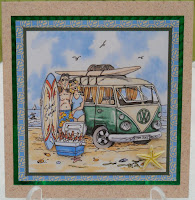 There was the camper van. I somehow had to use this great drawing.  I won't bore you with all the ins and outs but basically I used the image again but this time on a 7 x 7 card (which I had to make myself) and details and decoupage from two other La Pashe folders. 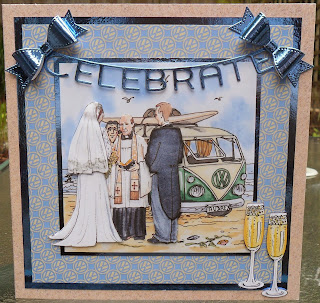 The Bride, Groom and Preacher were strategically placed to cover the surfers and their board except for the chaps face.  I couldn't quite cover that so he is there as a spectator.  The champagne flutes were from another folder and the Celebrate swag and bows were die cut.
All I need now is to know what words are required to go inside and it will be finished.......... and a 7 x 7 envelope ....anyone?

p.s.  I made a box instead of finding an envelope.  The box took almost as long as the card - won't be doing that again in a hurry.
As it turned out it didn't matter that I had to leave the 'spectators' face.  My son informed me that it could be him as he is the best man.  I am still involved in all this as  I am acting as chauffeuse for my other son who is attending the reception.
Posted by Carol at 09:40 4 comments:

Our theme for this Facebook ATC group for May is 'Black and White and 1 other colour'.
A perfect theme for some Zentangle - which I love- so here are the ones I sent off. 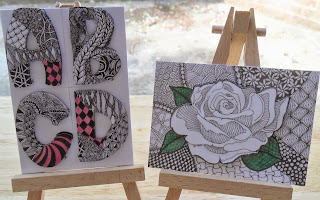 I have added some pearls and some decoupage to add dimension.

And this is how they have been presented. Always better than I could do. 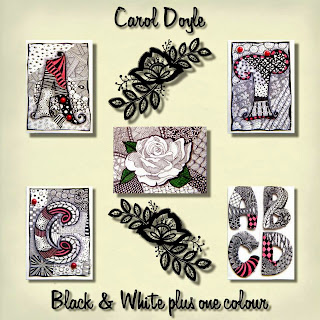 Good morning.  Well I have certainly been 'Stepping Out' with Jocelyn's chosen theme.  I have just returned from another little trip away. This time to a crafting friend and her husband in Northumberland.  By golly it is a long way and the M1 is .....! (This is a public blog and I need to be polite).  Despite the journeys I had a wonderful time.
Back to earth though.  I found a beautiful image on an old CD that I purchased many years ago when I first started crafting.  It was one of a set of 3 and came from America.  The one I used is called -
Lunagirl.com. Victorian Edwardian Images Volume 2.
Here is the card I made: 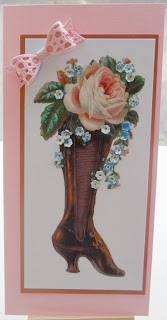 I printed the image on Photographic paper as it seemed to bring the Victorian colouring to life.  I found another image of lots of forget me nots elsewhere and printed that out on good quality paper and punched out some of the flowers with my Pinflair punch and attached them with a smidgin of glue to add a 3D effect.  The matt layer behind the boot was a peice of bronzed card I found and this seemed just the right colour.  The bow, of course, is die cut, using the same card as the base card and a darker lining.

Whilst I was making the above card what should fall through the letterbox but the new Ooh La La  CD - The Paula Oakley Collection.  As I have a new Great Nephew and found a suitable 'Stepping Out' image on the CD to use for his 1st Birthday I went ahead and made it.  It uses a card from the Quick Card section.  I printed it out twice so I could decoupage and added a pretty toning bow. 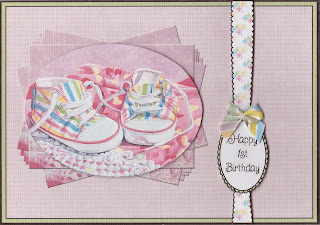 So two 'Stepping's Out' for the price of one.  I enjoyed making both and I hope you will search your CD's for suitable piccies and  join in with our challenge.
See you on your Blogs.
Carol
xx
Posted by Carol at 08:00 6 comments:

Good morning. I hope it is a brighter one than yesterday when I wrote this.  It was very gloomy with no sunshine.
Wynn has chosen our challenge theme for this week and I think that as quite a few of you have cats and or like cats we are hoping to be inundated with entries.

Here is my DT effort: 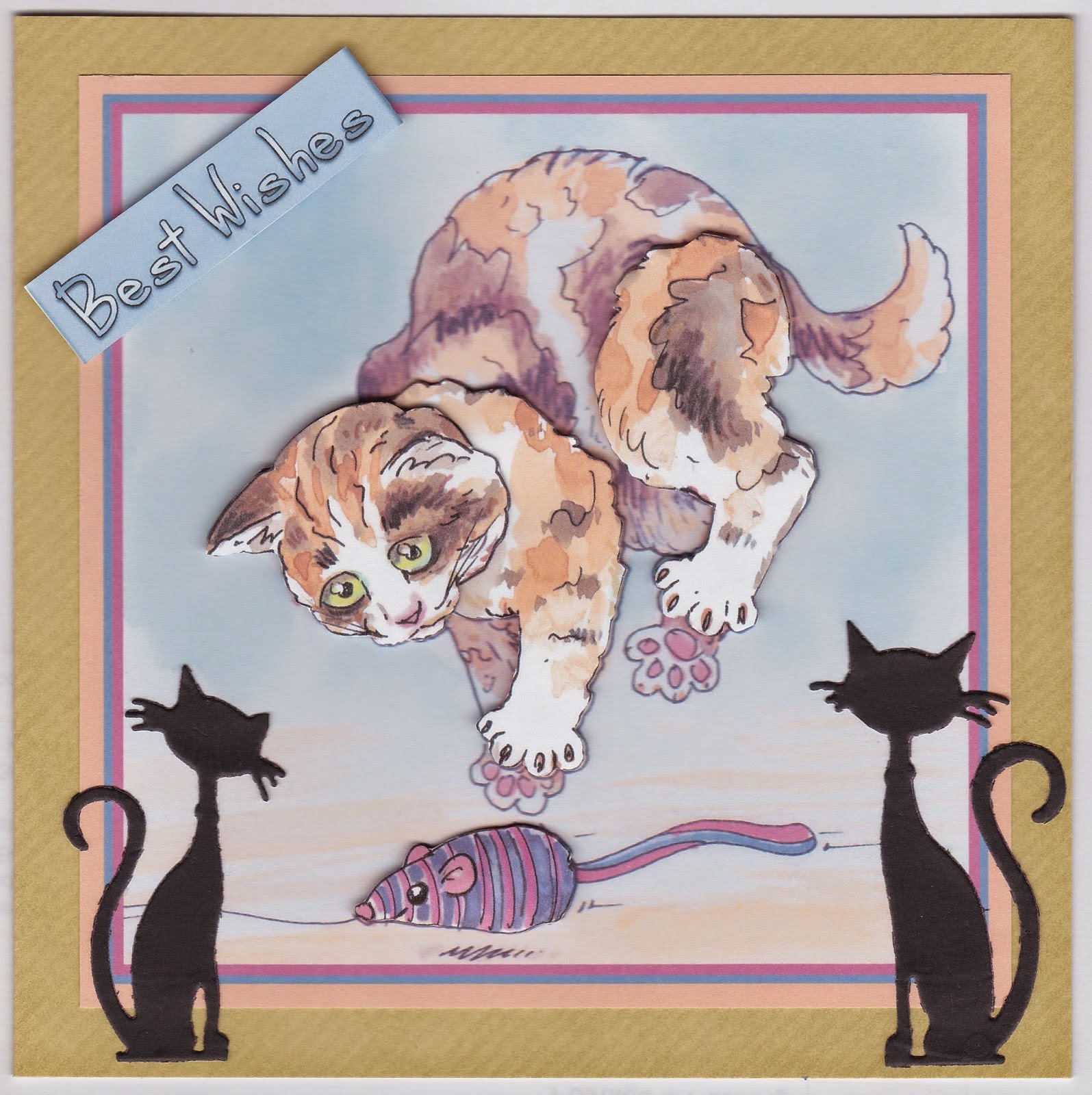 This is all from 'The Best of La Pashe' except for the two silhouettes who I like to think are looking at the crazy kitten with bemused smiles and thinking that they might help if the mouse was a  real one.
Die cut cats are Marianne Designs - French cats.

Christine will be back in a couple of weeks with her Top 3 choices for Layer it Up and please don't forget our concurrent challenge in memory of our late and sadly missed DT member Wendy  - aka Purple Crazy.  There is still a week left before the challenge is closed.
Have fun and please enter both challenges if you can.
Carol
xx
Posted by Carol at 08:00 10 comments:

Please do not copy or use any of the work shown on my Blog. It has been created by myself either using my own design or using or adapting source material that I have purchased for such a purpose.

Everything published here is copyright protected so please respect this. If you would like to know from where I have purchased a particular pattern I will try and tell you if you leave a message in the applicable comment space. 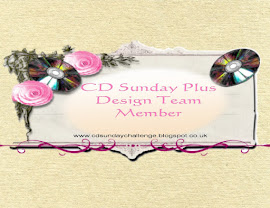 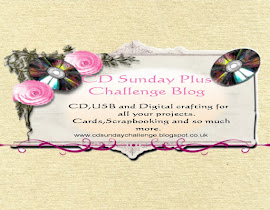 A young at heart Grandmother who is thoroughly enjoying many crafting mediums - particularly parchment work, stitching/beading and decoupage. And now especially die-cut decoupage with vignettes and charismas.